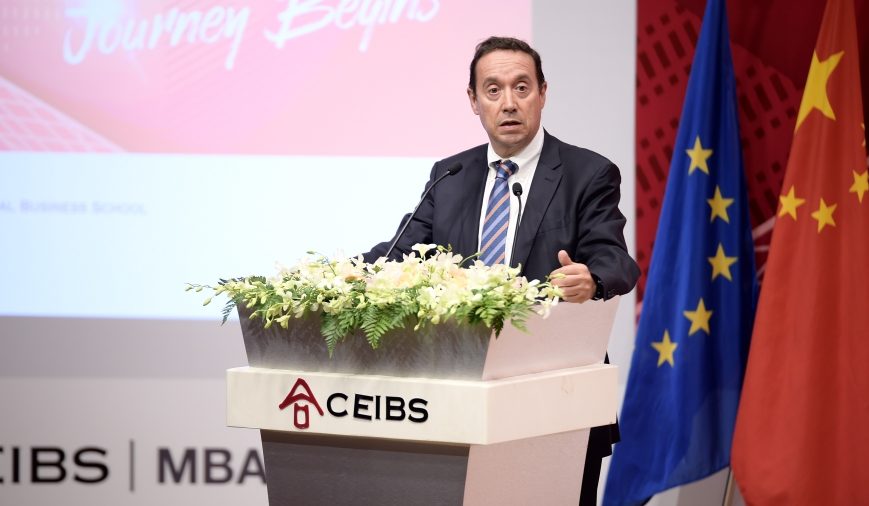 This year, the China Europe International Business School (CEIBS) has gained more attention than ever before with its record 5th place performance in the 2019 Financial Times MBA Ranking. To help explain what has driven CEIBS’ growth and how that impacts clients, we’re very pleased to speak today with Dean Juan Antonio Fernandez.

Admissions Circle: First off, thank you for taking the time to speak with us today. Coinciding with the university’s 25th anniversary, the Financial Times has recently ranked the CEIBS MBA the 5th best in the world. What do you see as the main drivers contributing to CEIBS’s success in the past year?

Juan A. Fernandez: In short, the leadership, professors, and colleagues at CEIBS have worked extremely hard to pull all of these fantastic resources together, however, we cannot overlook the fact that CEIBS was born at the right time and in the right place. Riding the wave of China’s economic miracle, we are the perfect partner for both Chinese enterprises going global as well as multinationals looking to strengthen their presence in China, which in turn creates more opportunities for our MBAs.

AC: There has been a lot of talk at CEIBS, especially from recently-appointed European President Dipak Chand, of potential upcoming changes—for instance, new MBA partnerships and US campuses have been mentioned—for the class entering in 2019, what changes can they expect to see during their studies?

JAF: I am excited to see some of the new initiatives that we have planned for 2019. One area that we have strengthened is our series of China Modules. This is a series of electives located in some of China’s unique geographies that have helped to make the economy what it is today. Some students go to Nanjing to understand how Chinese enterprises are going global, whilst others head to the tech capital Shenzhen to explore the rise of the city as an innovation hub. This year we will also be heading to the remote and ancient village of Yuyuan Taiji in Jinhua to help MBAs on a journey to discover their inner selves. We will be starting each day with sessions on mindfulness before moving on to work with the local communities.

AC: Despite the growing renown of CEIBS, some still tend to look at the program as concentrated on Chinese candidates. Over your tenure, have you noticed any substantial changes in the diversity and types of applicants?

JAF: This year, in the MBA class of 2020, 36.6% of students are from overseas, which is quite typical if we take an average of recent year’s recruitment data. If we take out China, the countries with the largest student representation are the USA and India. This may not be surprising, as, if you look at the data on the number of GMAT test-takers in each country, China, the U.S, and India have been top for a long time. China though, especially Shanghai attracts a broad spectrum of students, so in this year’s class, for example, we have an American who first came to China ten years ago to develop Abercrombie & Fitch’s retail presence and also an entrepreneur who is looking to implement lessons from China’s impressive rural development strategies back home in India.

AC: Jumping off of the last questions, what would you say would be an ideal CEIBS candidate? If it’s not possible to say, what sorts of traits do you personally look for and value in applicants?

JAF: Nobody can predict the future, but one of the questions we tend to ask our applicants is about the confidence they have in the future of China’s economic direction. If like most, you believe China will continue to play a leading role in global business, then given the unique environment, culture, and history here, it makes sense to carry confidence in doing business in China with you into the unknown future.

AC: As for potential students who have few experiences in China, what are the main ways in which you’ve seen CEIBS and its community come together to help them adapt and take advantage of all the opportunities available there?

JAF: If you are considering an MBA in the next three years, one valuable way to spend the summer is by joining our Pre-MBA Summer Boot Camp. By spending one week with us on campus, you get to join MBA lectures, visit our alumni making an impact in Shanghai and get to know the real experience before applying for the full programme.

AC: As a final word, do you have any advice for our readers who are exploring the possibility of applying to CEIBS?

JAF: Our focus at the MBA level is to continue to be the most advanced MBA in the Asia Pacific in which people and the digital revolution live together, so I would say that one of our competitive advantages is that we don’t, and can’t, stop improving!

In the last twelve months, for example, we have continued to build on our international footprint bringing three international statesmen into CEIBS as distinguished professors: the former Prime Ministers of France Jean-Pierre Raffarin and Dominique de Villepin, as well as the former Director-General of the World Trade Organisation (WTO) Pascal Lamy At MBA level, and we also welcomed the former Group CEO and Charmain of Sony Corporation Mr. Nobuyuki Idei to join as a visiting leader, offering one on one career coaching sessions to MBAs. There aren’t many programmes in Asia that can bring MBAs so close to proven leaders on the global stage.

Additionally, we also recognize the importance of students gaining not just a Chinese, but also a pan-Asia experience. MBAs will not only study with young professionals from neighboring countries, such as Japan, Korea, Singapore, Thailand, and the Philippines, but will also visit the likes of Hong Kong and Singapore on career treks, and take in overseas electives in Malaysia focusing on leadership for social responsibility and Japan focusing on entrepreneurship and innovation.

AC: I want to thank you so much for taking the time to help us better understand CEIBS.